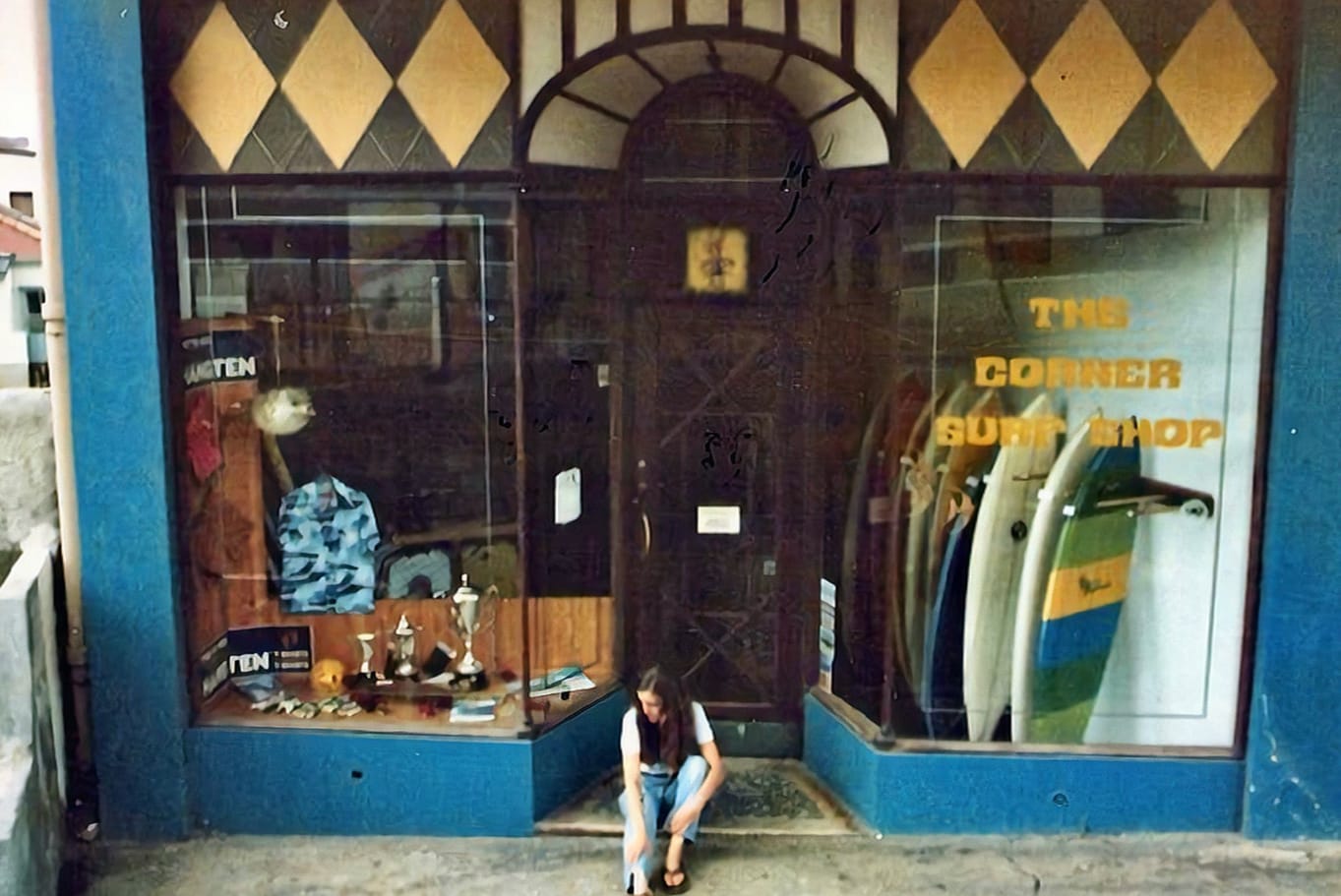 tessa outside the corner surf Shop 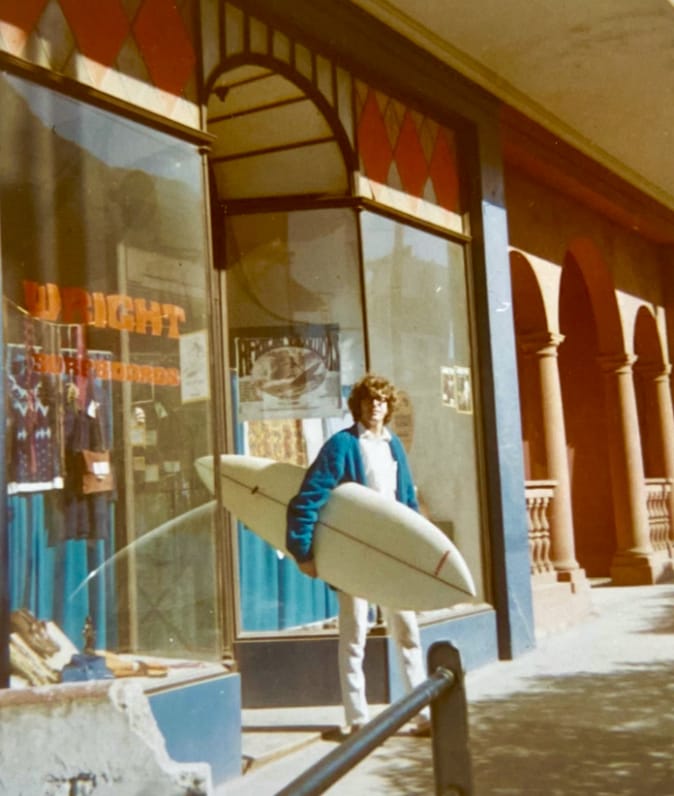 Peter outside the corner surf Shop

The Corner Surf Shop Opens in No. 1, Clarendon Lane, Muizenberg.

Peter Wright had resigned from his job at a Cape Town shipping company, intending to join “Chemical” Clive Barber at his surfboard factory. However, by the time Peter had said “cheers” to his desk job, Clive’s business had closed down.

Gap years were not an option at that time and being out of work was also rather suspect, so Peter set about building surfboards, for himself and friends, at his parents’ home in Kommetjie. After a while, his parents rebelled and he was forced to look for somewhere else to build boards. The little shop in Muizenberg was just big enough for a shaping bay and a glassing bay in the back, with a small retail area in front. It was a funky old teak-windowed Shop, with lots of character and at the time, the only surf shop in all of Cape Town. Unfortunately, these premises no longer exist, as the old Surf Inn building was knocked down during the redevelopment of the Muizenberg beachfront.

Peter’s surfboard label, Wright’s Surfboards, became the choice of the cream of the Western Province surfers at the time – from, amongst others, Guy McIntosh, through to the hot Juniors of the day: Hans Kamhoot, Vernon Castle, Sheldon Lindsay and Kevin Dennett. The Boy’s Division was represented by Davy Stolk – still a legend!

Peter also developed and made a surf wax, later named Jenny Wax – the most popular wax in South Africa in the Seventies.

There was very little available in the way of surfwear – the earliest labels we carried were Hang Ten and Vella (which came from Port Elizabeth).

Tessa Moore had been around the shop since August 1971, but in 1973, she joined the business full-time and is still there today, as Peter’s right-hand woman.

In the mid-Seventies, around 1975, Peter was the first importer of American skateboarding equipment into South Africa. The first shipment was of Chicago trucks and wheels, which was the start of a very busy era of distributing skateboard goods throughout the country.

Soon, we were manufacturing our own fibreglass and oak decks, as well as the aluminium Wright Trucks. To reach the peak of local skateboarding, was to be a member of the Wright Skateboard Team!

The Corner Surf Shop was asked to run several big skateboard contests: The largest was on the rooftop of Cavendish Square Shopping Centre, in Claremont, Cape Town. This attracted about 5000 onlookers and the main events were freestyle, slalom, long-jump and high-jump – Yes…high jump! There was also another popular contest at Kenilworth Centre Shopping Centre, where the KC Skateboard Park had been built. It is amazing to us how well our skateboarders did style-wise, when compared to the international guys shown on the movie, “Dogtown and the Z-Boys” One has to remember that there were no videos to follow, so all the moves had to be extracted from photos in the occasional skate mag.

Another surfing innovation of the Seventies was the waveski. Peter Wright, together with Duncan Temple-Forbes, developed the first commercially-produced short waveski, the Skiwee. Soon afterwards, copy-cat waveskis came onto the market, but The Corner Surf Shop held onto its top spot, with superior foam-sandwich construction and cutting-edge design. The Skiwee was succeeded by The Gopher and The Gopher 245 models, both shaped by well-known surfboard manufacturer, Andy Spengler, with input from the star waveskier of the day, Paddy Smith. In the late Seventies, it seemed as tho’ every second car had a waveski on its roofrack and once again The Corner Surf Shop was at the top of the game, making the skis chosen by the best Western Province riders.

The Corner Surf Shop also brought out the first range of surf accessories made in South Africa, under the Jenny Cord label. These were distributed throughout South Africa’s surf and sports shops. 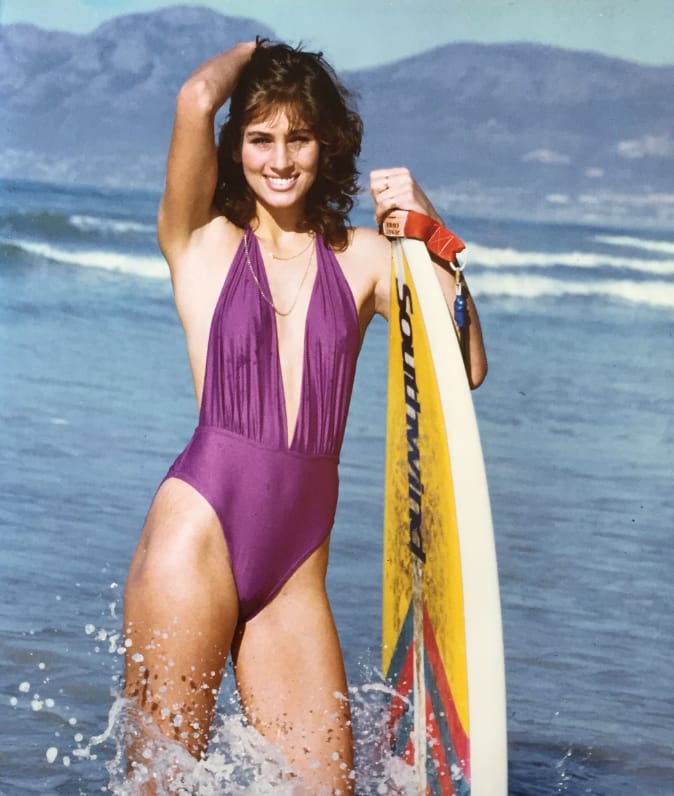 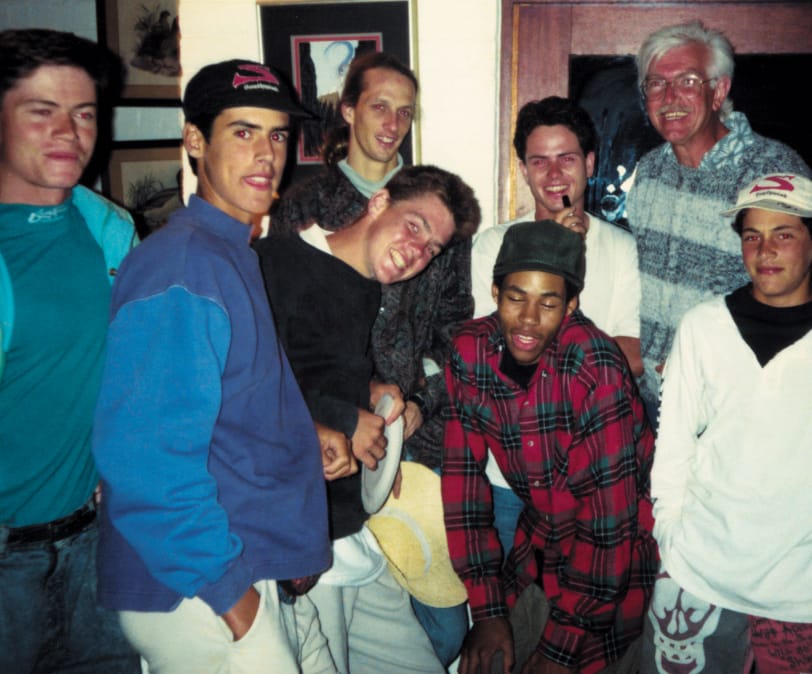 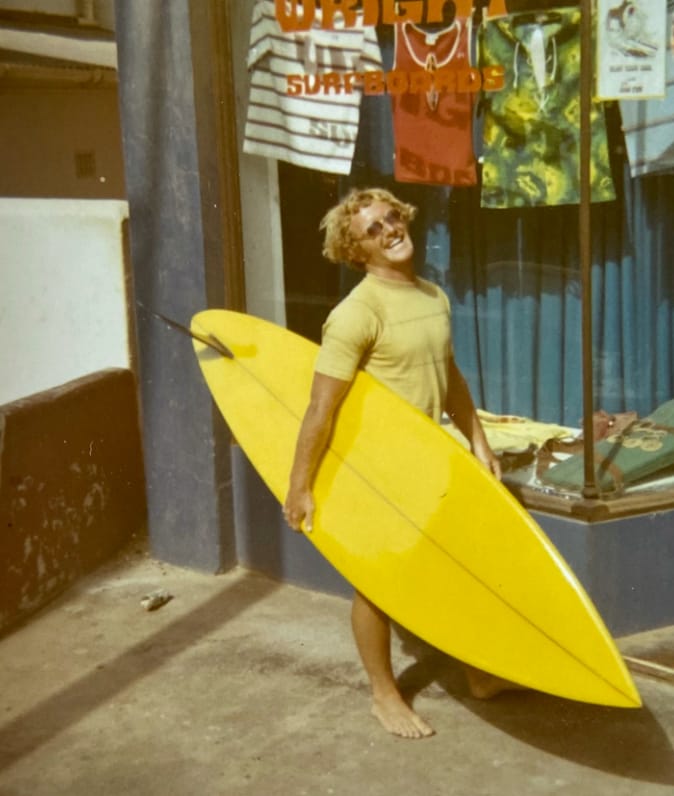 The Corner Surf Shop was also the first importers into South Africa of Tom Morey’s new product, the Morey Boogie. Peter Wright visited Tom Morey at his home on the Big Island of Hawaii. While there, he was given the go-ahead to produce and distribute these boards locally.

Around 1977, while on a visit to Jeffrey’s Bay, Peter comes across Cheron Habib (later Kraak), sewing cord shorts with funky floral wooden buttons. The Corner Surf Shop became the very first shop to be supplied by Cheron, who went on to found the famous Jeffrey’s Bay brand, Country Feeling, and to be the formidable force behind the Billabong franchise in South Africa.

Between 1971 and 1978, The Corner Surf Shop had more than doubled its size. The manufacturing had long-since left No. 1, Clarendon Lane and the shop had evolved to double-volume – with an upstairs office. It then spread to other premises further up the lane, giving us a surfboard showroom. We were carrying about fifty boards in stock – a large number at the time. They were of the best labels from Cape Town, J-Bay and Durban.

However, the divided shop became hard to manage and we started looking for bigger premises. With a lot of luck, we managed to rent our current spot, at 143, Main Road, Muizenberg. It took a long time, but eventually, we succeeded in buying this building and securing the future of The Corner Surf Shop. Incidentally, to correct a common misconception: “The Corner” is not because of being on a corner, as the original shop wasn’t – but it is named after “The Corner”, the Muizenberg surf break.

In 1979, The Corner Surf Shop installs the first automated phone-in surf line in South Africa. It’s still in action to this day and we do not charge for calls made to this phone number. 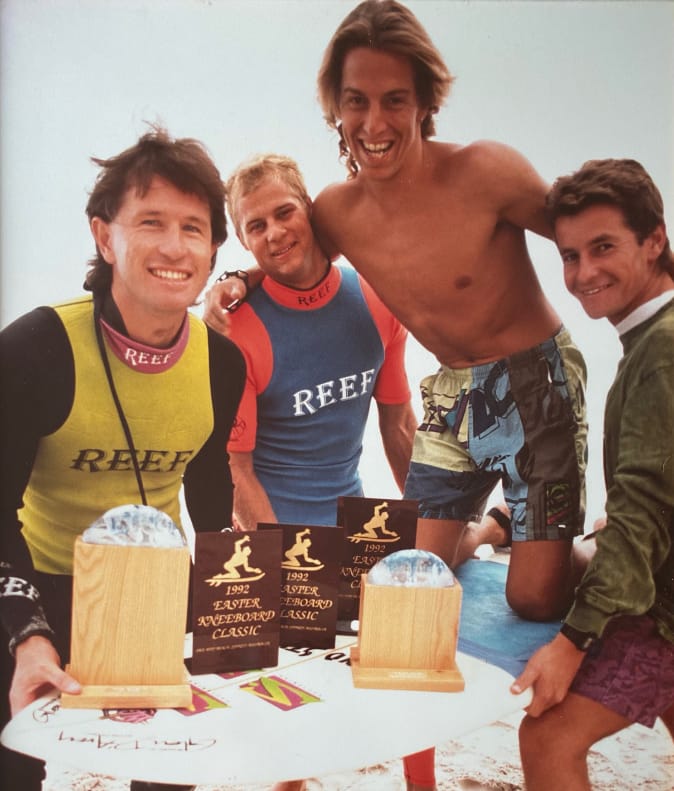 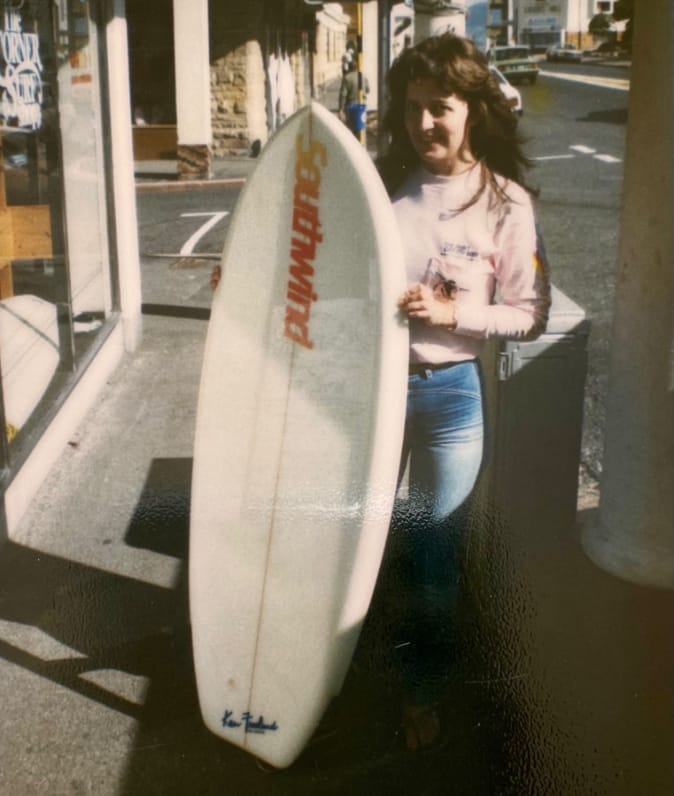 Peter retired the Wright Surfboards label and replaced it with the name Southwind. Again, the hotties of the Western Province team were riding these boards – including “Jarvie” – Craig Jarvis, of Zigzag Surf Magazine fame.

The popularity of the new surfboard label also evolved into the rebranding of the skateboard products under the Southwind name. The Wright Team long-sleeved teeshirt was re-invented with the Southwind logo down its arms and became the most popular and famous item of surf clothing in Cape Town, until well into the 1990’s. They sold in their thousands and each and every one of them came from The Corner Surf Shop.

The Nineties And Noughties

The Corner Surf Shop, has expanded the retail floorspace, within its premises and now has a greater area for our surfboard stock. We are proud stockists of the Surf-Tech brand, particularly the wood veneer boards, which make for a spectacular display. Peter is also a keen collector of old surfboards which reflect South Africa’s, with an emphasis on Cape Town, surfing history. He has, what we believe to be, the biggest collection of Whitmore surfboards in the world. These are hung up in The Corner Surf Shop and Peter is determined not to sell any of them. From the days of the first Endless Summer movie, John Whitmore’s name has been the most famous in Cape Town’s surf history and The Corner Surf Shop honours him with through Peter’s display of boards.

When you come into The Corner Surf Shop, there is no mistaking the classic surf vibe, which with our deep surf roots, combined with the latest in core surf equipment, keep The Corner Surf Shop Cape Town’s No. 1 surf shop and an absolute must for any surfer to visit. 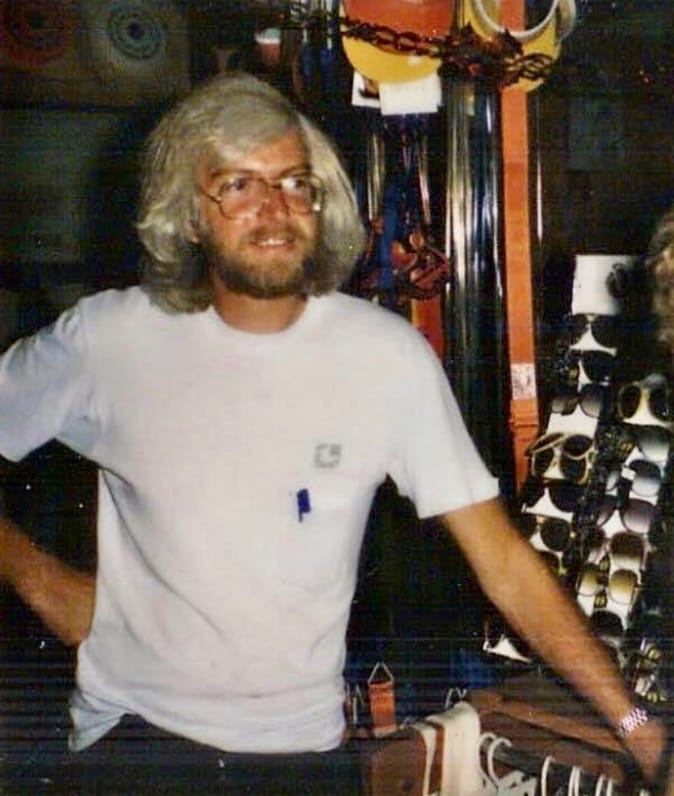 Peter inside the corner surf Shop

You can find out more about which cookies we are using or switch them off in settings.

This website uses cookies so that we can provide you with the best user experience possible. Cookie information is stored in your browser and performs functions such as recognising you when you return to our website and helping our team to understand which sections of the website you find most interesting and useful.

Strictly Necessary Cookie should be enabled at all times so that we can save your preferences for cookie settings.

If you disable this cookie, we will not be able to save your preferences. This means that every time you visit this website you will need to enable or disable cookies again.

This website uses Google Analytics to collect anonymous information such as the number of visitors to the site, and the most popular pages. Keeping this cookie enabled helps us to improve our website.

Please enable Strictly Necessary Cookies first so that we can save your preferences!